Futures are off slightly as we approach the open, recovering 25 points from the overnight lows as the algos resume control. 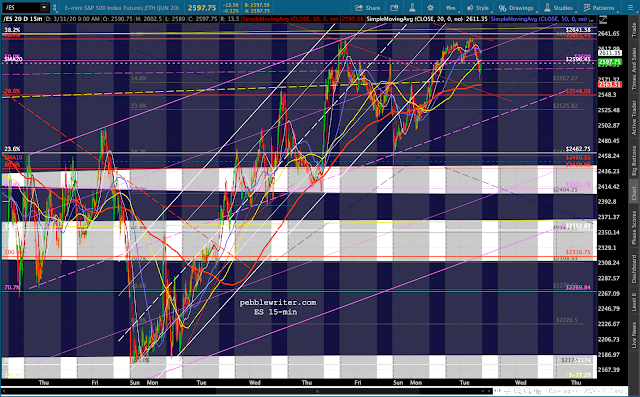 VIX continues to call the shots, as it has dropped through both the red neckline and the SMA20. Yet, it continues to bounce every time SPX/ES approach a breakout point, suggesting that the bounce might have completed. 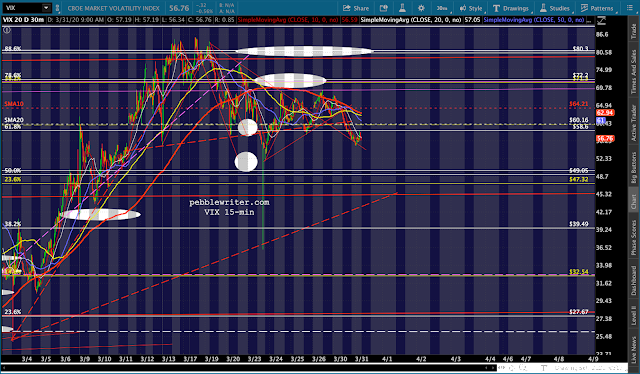 For its part, SPX has yet to break above the purple trend line from 2016 and, like ES, avoided making a higher high yesterday. 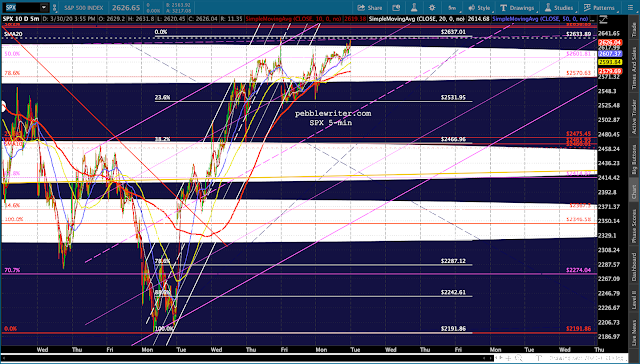 As expected, USDJPY has edged back above its SMA200, providing an extra nudge for stocks… 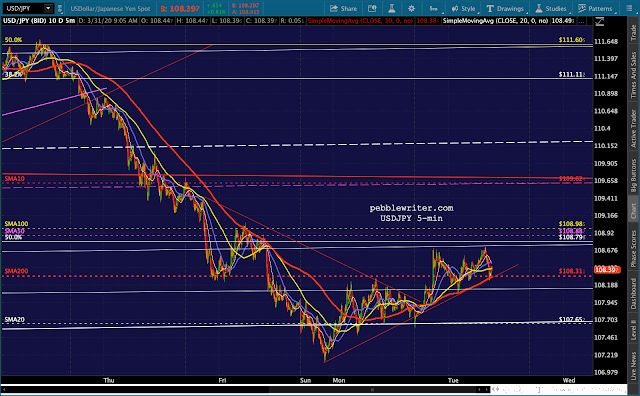 …and putting a little bounce in DXY’s step. 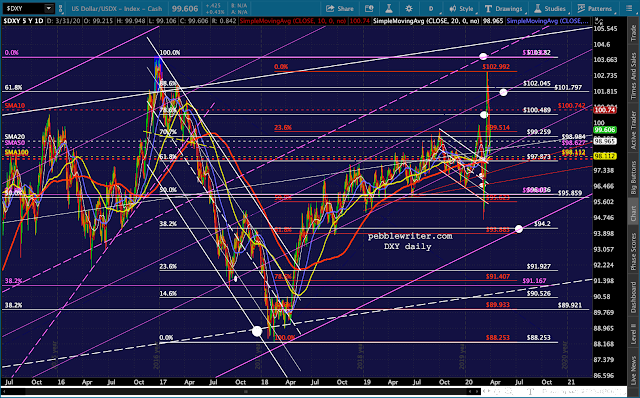 EURUSD is contributing as it continues to decline after failing to retake its own SMA200. 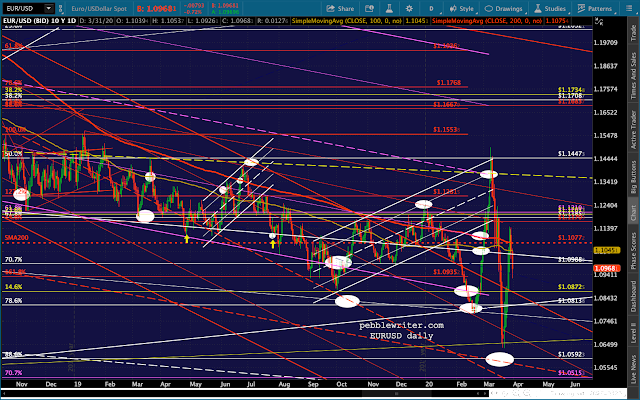 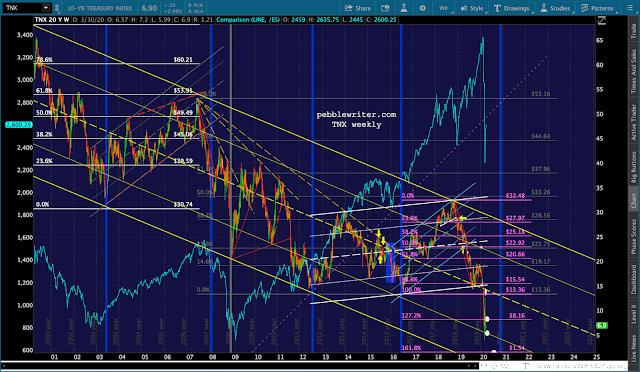 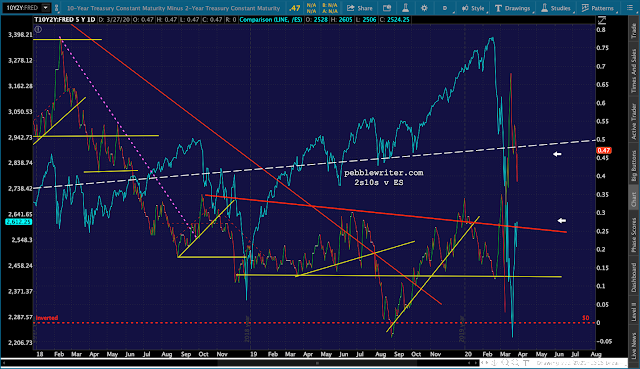 ...with the 2Y still hanging on for dear life. A reminder, this is one of the last substantive support levels for the 2Y. The coming breakdown will likely widen the 2s10s, making any further equity gains difficult. 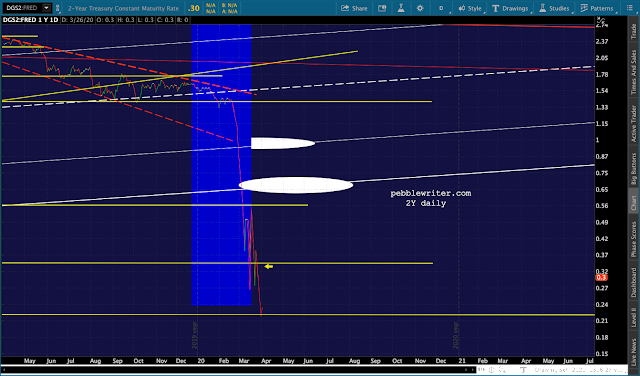 Gold continues to be a model of restraint, backtesting its red channel again as it plans another assault on 1708-1735. 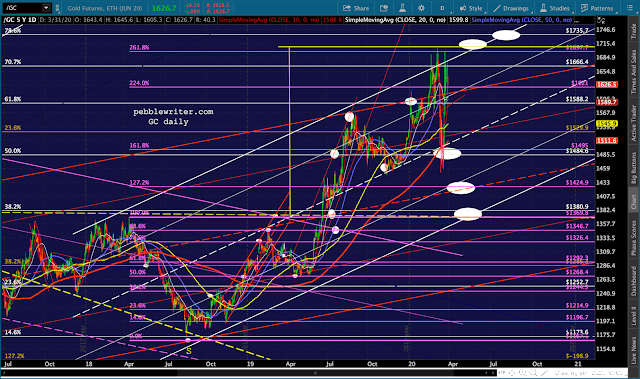 Trump and Putin reportedly put their heads together yesterday to plan a rescue for oil prices. But, CL has yet to exhibit much of a bounce and remains mired at the lower end of our 20-26 range. Perhaps it has something to do with all that surplus oil sloshing around, searching for any storage facility with extra capacity.

While higher oil prices would certainly help stocks – an important goal for many, none more so than Trump himself – they would constitute a tax on the many unemployed/beleaguered consumers who are wondering how to make ends meet while they await their government checks.

For many of those in high-priced areas such as major coastal towns, of course, those checks can’t come fast enough and won’t cover rent/mortgage payments – a topic for a future post.

Gas prices continue to loiter at the bottom of that falling channel, though the bounce off the recent lows is looking tired. 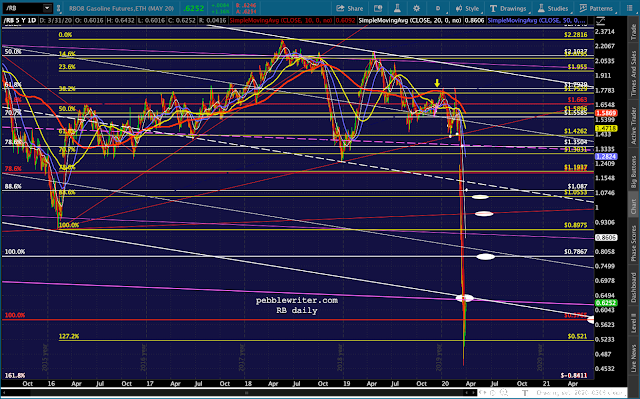 In the absence of any miraculous medical breakthroughs, it still looks like yesterday’s highs will continue to hold and ES/SPX’s trajectory will be lower, perhaps to the bottom of the rising purple channels around 2350 as early as tomorrow. That should be the next line in the sand, with ES 2155 and SPX 2138 still our next preferred downside targets.

While we’re in forecasting mode, I’m told that this site should be working normally sometime later today. If you’re reading this on pebblewriter.com, you’ve already figured that out. I’ll repost on pebblewriter.blogspot.com …just in case.

I’m going to take some time and update our COVID-19 forecast which, sadly, continues to be on target. More later.

As we stumble into the final hour, things aren't looking very bullish. Never underestimate the power of a last-minute VIX smackdown, but there are quite a few warning signs flashing red. 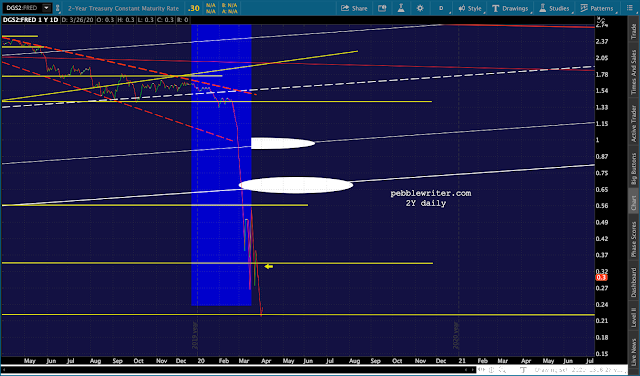 It quickly snapped back to the .22 support, but this is a very big deal according to our 2Y model. 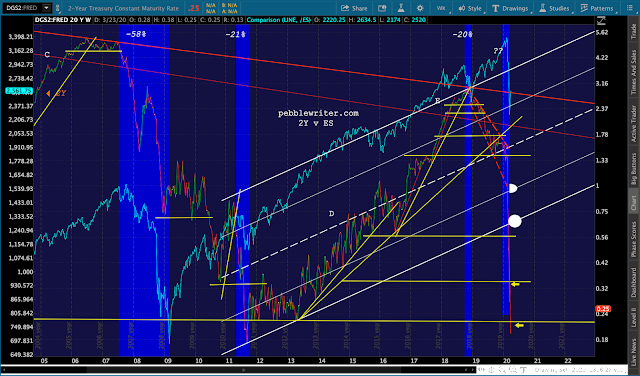 The other pretty big deal continues to be the oil market collapse. Sure, it clawed its way back to the channel bottom, but for how long? The next lowest support is the Nov 2001 lows at 17.12. 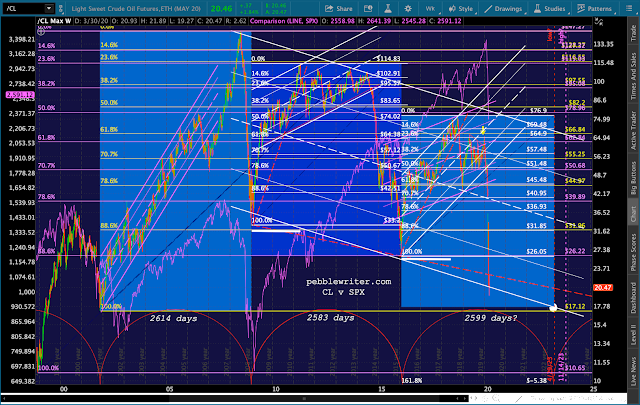 Then there's DXY which, thanks to USDJPY and EURUSD, is having a hard time staying aloft. 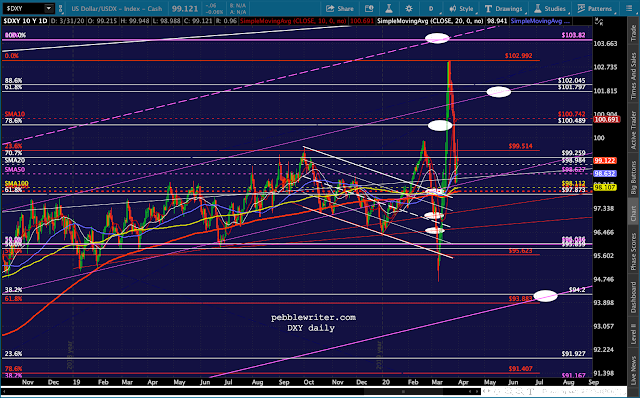 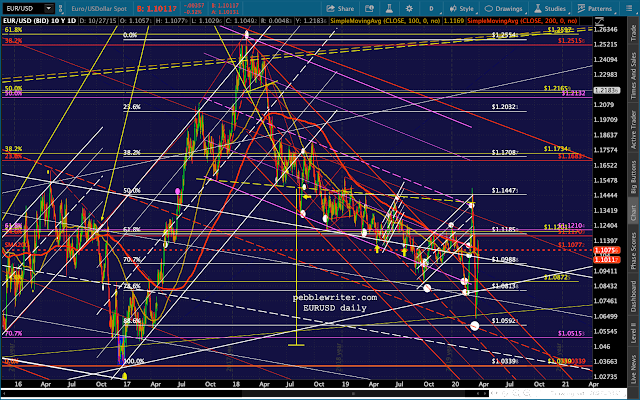 Although the USDJPY could still go either way, the BoJ apparently hasn't signed off on a wholesale devaluation of the yen. 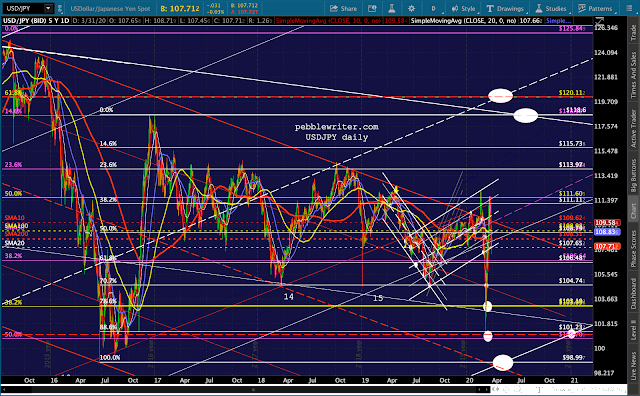 This leaves poor little VIX with some very heavy lifting to do. As the month- and quarter-end rebalancing winds down, can it continue to offset a very grim economic outlook which, according to Goldman, includes a -34% Q2 GPD read. 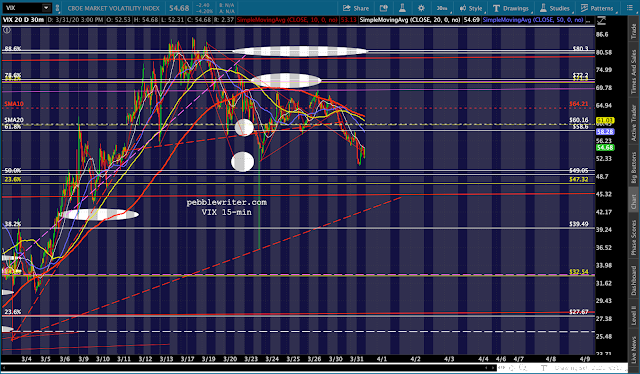 The worst of the economic data has yet to roll in, but in the days ahead we'll get ISM, EIA inventories, factory orders and payrolls. It won't be pretty. 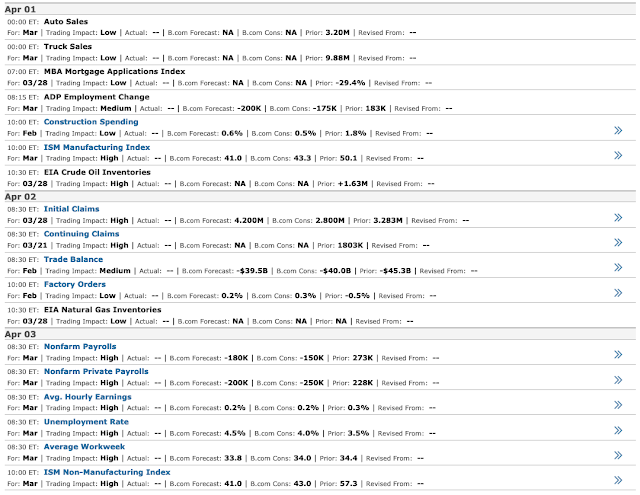 ES and SPX - which have clearly rolled over - might be able to hold support at the close, but I wouldn't trust them overnight regardless of where they close - not on a bet. 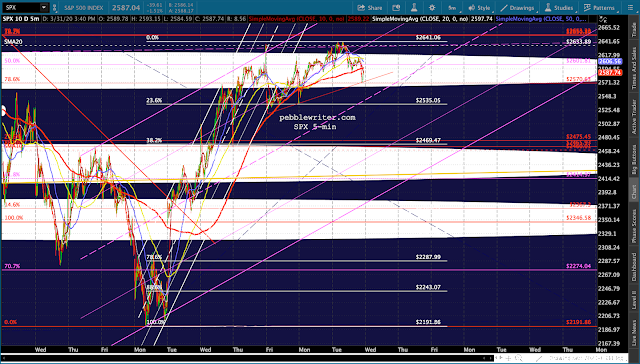 Posted by pebblewriter at 10:51 AM 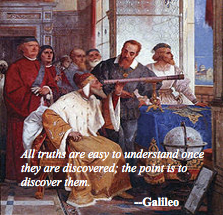 pebblewriter
I left Wall Street in August 2001 (95th floor of WT2, timing IS everything) and continue to trade for fun and profit. I hold undergrad degrees in Math and Econ, an MBA and am a CFA. Which is all to say -- I have no excuse for the miserable mistakes I often make. This blog serves as a means to keep myself honest and my thoughts organized. It should not be construed as advice regarding any particular strategy or security.

if this blog helps you...

...please consider passing it on. Read to your kid's class instead of going out to lunch. Give blood. Take the money you budgeted for Starbucks and give it to your favorite charity.

This blog doesn't accept donations. Any revenue derived from your patronizing the companies that advertise on this page goes to a foundation dedicated to the memory of a dear friend.

The Michael J. Novosel Foundation was established to assist National Guard members and reservists with the challenges of transitioning from service back to civilian life.

Mike Novosel, MOH and his son, Mike Jr., were medical evacuation (Dustoff) pilots in Vietnam. Between them, they rescued more than 8,000 soldiers and civilians. See more about Mike and Mike Jr. here.

NOTE: In March of 2012, the new pebblewriter.com was established. It offers professional level technical analysis and research to those who don't mind paying for it. Membership information available here.